Princed is a Prince of Persia 1 level editor for DOS.
Its official website can be found here. 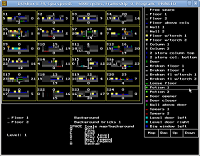 A Windows version of Princed was under development.
Downloads are for Windows. Binary: pv3.alpha7.bin.exe (84KB) Source: pv3.alpha7.src.zip (233KB)
To load other levels, use PgUp/PgDn. Version 3 alpha7 was released on 11 October 2003.