On 29 March 2012, Mechner announced that he - his father - had found the 3.5" Apple ProDOS disks that contain the original Apple II (6502 assembly) source code of Prince of Persia. 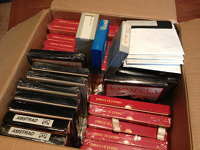 On 13 April 2012, Jason Scott wrote about how he and Tony Diaz would be helping Mechner with extracting the source code from these disks.